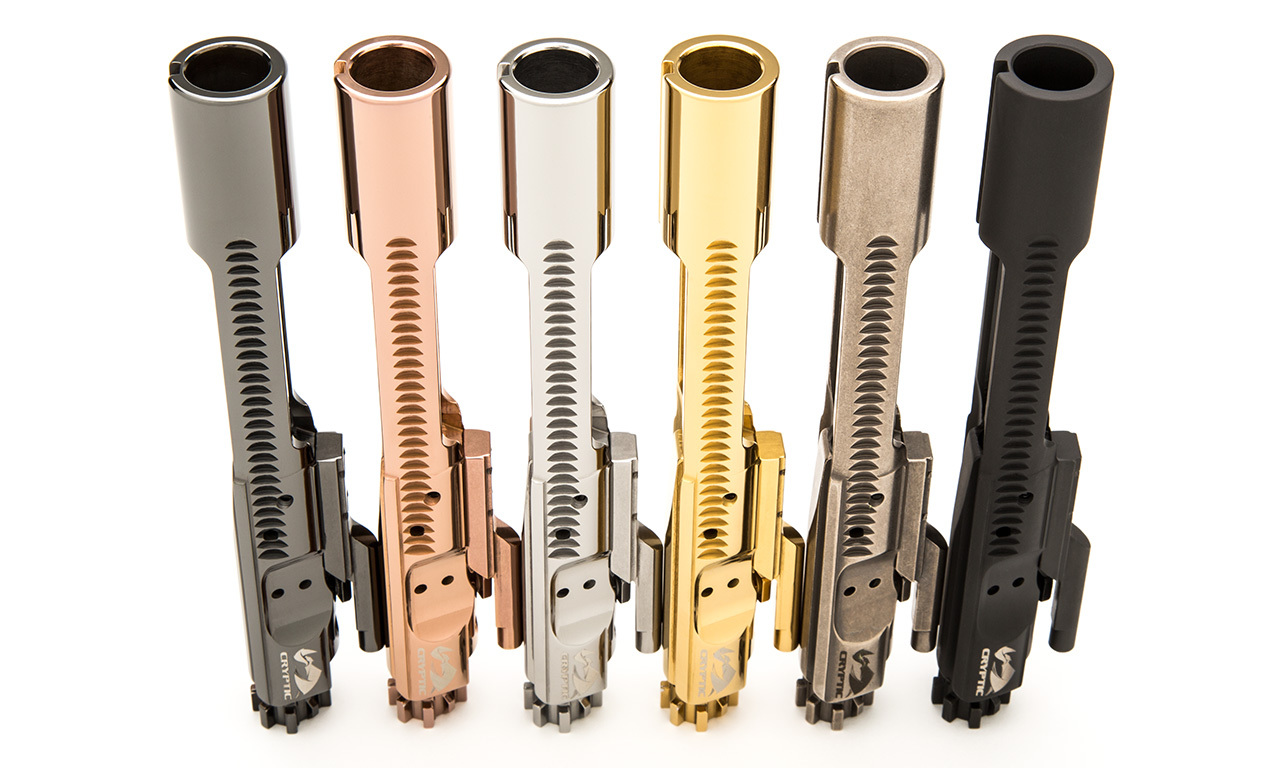 Your Bolt Carrier Group comes in about as many different coatings as you could think of, but the question I had was: What does it really mean? So, I started digging, and let me tell you, I found a wealth of knowledge and a fountain of opinions. I will start this post with the technical facts of the coatings and then throw down the practical, real people talk of what all of it means.

As a note, there are tons of different coatings, and not all of them are equal, so be careful when you are shopping around. I am going to focus 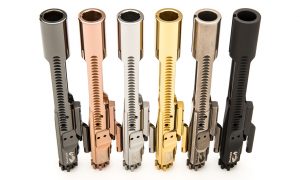 on four of the most popular: Magnesium Phosphate, Black Nitride, Nickel Boron, and Diamond-Like Carbon (MagPhos, Nit, NiB, & DLC for short). Some of these coating names can cover quite a range, and many of them are titled by proprietary names, further adding to coating confusion.

The main reason for coating a BCG is reliability. If it runs smoother, and is harder, it will last longer. Also, steel corrodes, so they are coated to prevent corrosion. All of the coatings prevent corrosion, so we will focus on hardness and slickness.

Slickness is described by Coefficient of Friction, or CoF. CoF is the frictional force between two objects. CoF can be defined as kinetic CoF or static (whether the parts are moving or not). The takeaway from this is that there are various ways to measure CoF that will result in different numbers, but the key point to remember is that lower is better. Lower CoF means lower friction, which leads to lower heat generation and less wear. What it does give us is a good starting point to compare the relative slickness of each coating. A standard MagPhos BCG (and Nitride) rates somewhere around .80 – 1.2, depending on the website you look at.  Next down on the scale is NiB, with a CoF of .44 – .95. DLC tends to show numbers from .08 – .45. Keep in mind, these numbers come from companies that are trying to upsell BCGs or are selling coatings. Basically, Nitride and MagPhos are roughly the same, NiB is about twice as slick, and DLC is about four times as slick.

Real Men of Hollywood Are Pro-Gun!

be listed on several different scales, depending on how the material is tested, listed as A-V, all of which are referred to as Rockwell. To further muddy the waters, some companies prefer to use Vickers rating, a rating that has no easy relation to Rockwell. I will try to slap a rough hardness on here, but most of the information available is more for selling BCGs to dealers than informing consumers and know-it-alls. Most sites won’t discuss hardness with the MagPhos, because it’s the base line. The reality is that MagPhos doesn’t add any additional hardness, so it is not measured. MagPhos was added to the steel carrier to fix corrosion issues. That’s it. Simple. Now, let’s talk about NiB. Roughly speaking, Rockwell quotes will be somewhere between 70-74. It varies depending on the various types of NiB. From what I have found, no matter what the company selling it says, Nickel Boron coatings are essentially the same. Same goes with DLC, LifeCoat, X-Coat and the many other names it goes by. DLC, by the way, seems to be about 90+ in Rockwell terms.

What Does It All Mean?

Ok, this is what you have all been waiting for, and if you skipped ahead to read this, I don’t blame you. All of this technical crap can be summed up by saying this: It doesn’t really matter. If you want my advice, all of them are good, get the one you want. This is your rifle, and its about you, not someone else. The price difference when it comes to coatings it less than $100 from MagPhos to DLC, so why not get what you want. Is swapping out a BCG going to make you a “lubeless” rifle? Only if you get the upper, lower, and charging handle coated as well.  Are you going to see any better accuracy or reliability? No. Think about it, the M-16 (which is the basis for the AR-15) has stayed essentially the same for over 50 years. Maybe they got something right. If you are considering a coating, here’s a few pieces of advice. First, most chrome coatings are about as good as painting the BCG, don’t buy them. As for NiB, read the reviews from actual customers. If they have a good track record, then go for it. The biggest issue you will face is flaking. This is a sign of a bad coating. As for DLC, don’t buy into the name differences, they are all pretty identical in function. At the end of the day, if you want to buy your bragging rights, brag on, loud and proud. Now you can add in some stuff about CoF and Rockwell, and brag smarter.

Why Do I Need an “Assault Rifle”?